FoxFury Lighting Solutions will exhibit its LED fire helmet lights, portable scene lights and right angle firefighter flashlights at FDIC 2013, the world's largest firefighter training conference and exhibition, next week in Indianapolis, IN. FoxFury will unveil its newest light as well as have two special guests (Eddy Weiss of Chasing4Life and Ryan Pennington of Views from the Jumpseat) in booth #5457. 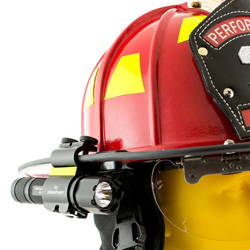 FoxFury has made application-specific LED lighting tools for professional markets since 2003. Over the years, FoxFury has introduced its newest lights for first responders at FDIC. This year, FoxFury's newest light will be unveiled on Thursday, April 25 at 1:23 P.M. EDT.

FoxFury will have a wide array of fire, rescue, and EMS lights on display including AA battery powered helmet lights and portable, rechargeable Nomad Area-Spot lights. The following will be among the lights featured in booth #5457:

FoxFury is also proud to announce that it will have two very special guests in its booth at FDIC: Eddy Weiss and Ryan Pennington.

Eddy Weiss is the Founder and Executive Director of Chasing4Life. He is a former firefighter, a storm chaser, and considered a leading authority on Disaster Preparedness, Strategic Planning, and Disaster Mitigation. He has responded alongside his disaster response team (C4LDRT) to disasters across the US including Joplin, MO and the northeast during Hurricane Sandy. Eddy has used and abused FoxFury lights for four straight years in his work with the C4LDRT.

Ryan Pennington is a Firefighter/Paramedic for the Charleston Fire Department. He is a contributing editor for Firehouse.com and also operates the popular firefighter blog Views From the Jumpseat. Ryan's passion is firefighter safety with an emphasis on fighting fires in hoarder homes.

"We expect FDIC 2013 to be bigger and better than ever. We're excited to unveil our newest light to the people we serve," said Mario Cugini, CEO of FoxFury.

FoxFury will also be having a contest at FDIC to win a free Nomad Prime Area-Spot light. Ten contestants will be chosen to compete. Entry forms will be available at FoxFury's booth on Thursday, April 25th and Friday, April 26th with a drawing at noon on Friday to determine five of the contestants. The other five slots will be given away via Twitter. Check out FoxFury's Twitter page next week for details.

FoxFury's lights, along with Eddy Weiss and Ryan Pennington, will be available at the FoxFury booth (#5457) during FDIC. The exhibit portion runs April 25-27 in Indianapolis, IN. FoxFury's booth will be in the Indiana Convention Center.

About FoxFury Lighting Solutions:
FoxFury Lighting Solutions creates unique and cutting edge lighting products that reflect the needs of our customers, who demand quality and dependability. FoxFury is best known for its niche LED headlamps designed for specific markets including Fire, Industrial, Hazardous Area, Law Enforcement, Forensics and Recreational. FoxFury was formed in 2003 and operates out of Vista, CA USA. You can follow FoxFury on Twitter @foxfuryLED

About FDIC:
FDIC 2013 in Indianapolis attracts firefighters from around the world to train, network and learn from the industry's most elite instructors. FDIC features fire house H.O.T. (Hands-On Training) courses, classroom sessions, and an expo showcasing thousands of firefighting equipment and products. You can follow FDIC on Twitter @fdic.

About Chasing4Life:
Chasing4Life is an educational organization focused on educational tours, disaster preparedness, emergency management, disaster response, and disaster research. Its team's members have responded to disasters around the world and it is our hope that they will continue to do so. You can follow Chasing4Life on Twitter @chasing4life.

About Ryan Pennington:
Ryan Pennington is a Firefighter/Paramedic for the Charleston Fire Department in Charleston West Virginia. He is currently assigned to Station 8 and is part of the West Virginia Task Force 1 USAR team. He has over 15 years of combined Fire, Rescue, and EMS experience. Ryan is currently a WV State Instructor 2, Hazmat Technician, and Certified Fire Officer 2. He is very involved teaching EMS and firefighter safety around the country. You can follow Ryan on Twitter @viewsfromthejumpseat.