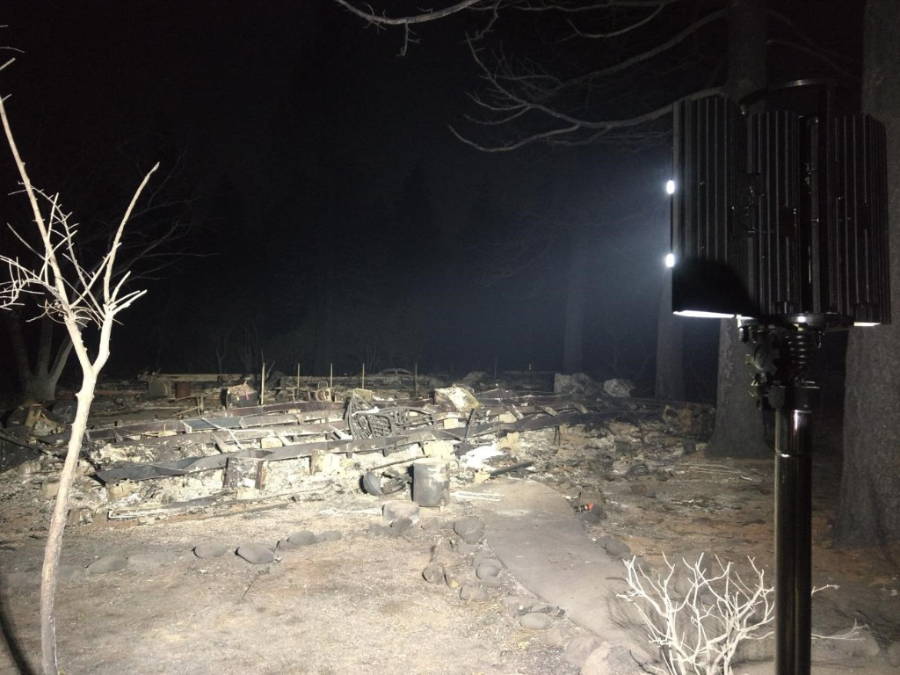 BUTTE COUNTY, CA - A team from FoxFury Lighting Solutions arrived in Butte County, California yesterday as part of a massive effort to locate the remains of those missing and dead from the Camp Fire. According to the latest updates, at least 79 people are dead, although the California Department of Forestry and Fire Protection (CAL FIRE) expects that number to rise.

Braving dangerous air quality issues, destroyed neighborhoods, and almost impassible roadways, the FoxFury team joined forces with responders in Butte County yesterday, including the National Guard, to help search over 11,000 sites for clues as to the location of the missing. FoxFury brought Nomad® Scene Lights as well as a variety of forensic lighting sources to the scene so that search teams can continue to work into the night.

The search continues today in the hopes of bringing closure to those still seeking information about missing loved ones. The threat of rain on Wednesday has many rescuers worried. While the rain may help stop or slow the Camp Fire, it brings with it the risk of landslides, mudslides, and ash flows that could drastically hinder any search and rescue efforts including the search for and discovery of remains amidst the catastrophic amount of debris left by the raging fires.

“We have never done this before,” said FoxFury Marketing Director Antonio Cugini as they completed their first search with the National Guard. “I don’t think anyone has ever done this to be honest. This scene is so massive. It is just all bombed out. Everything is black. Nothing is recognizable.”

“Normally, forensic lights are used in a confined space or in a small area. This is not the scenario here,” explained Chris Giles, FoxFury Videographer and Lighting Technician, searching alongside Cugini. “A forensic light source is a crime scene investigator's and lab technician's tool for enhancing observation, photography, and collection of evidence. We are hoping that our forensic scene lights can help these teams cover more ground.”

The search area is indeed massive. According to CAL Fire early this morning, the Camp Fire in Butte County was 151,272 acres in size and 70 percent contained by the 4,736 personnel still battling the flames.“With the incoming rain threats, we wanted to give these responders every advantage,” Cugini said when asked why the company decided to send the specialty lights to Butte County. “After speaking with the Coroner’s office, we knew that we had to at least try to add tools to the search effort.”

Cugini shared that he was not prepared for the amount of destruction that surrounded them on Monday night, expressing that it was overwhelming. “This is a massive job. You cannot understand unless you are standing here in the middle of it how large this scene is and how bad it really is.”

CAL FIRE said 11,713 homes and 472 commercial structures had been destroyed in the fire so far, and another 14,500 structures are still threatened. Butte County reported this morning that 630 people are still missing.