To most of the United States, this summer’s total eclipse lasted less than three months and many wondered why it was a news story at all, but for those of us that were involved in the months of planning and the strategic partnering it took to protect the public know just how long the eclipse really lasted. 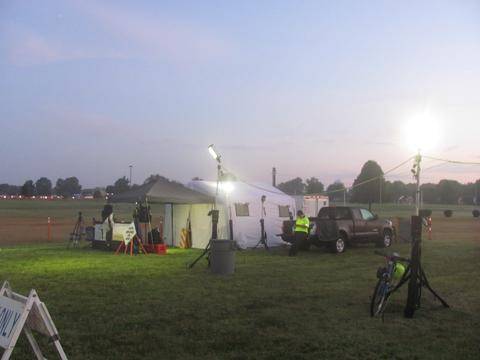 A command tent was set up on the property for UAV pilots filming the event.

Take Hopkinsville, Kentucky for example. The warm and friendly western Kentucky town was designated “Eclipsville” by NASA and the game was on.

Hopkinsville was the point of the greatest eclipse for the total solar eclipse that swept the country on August 21. Because Hopkinsville was to the darkest city in the path of the storm for the longest period of time, it also became the destination point for an estimated 200,000+ people wishing to experience this once-in-a-lifetime event.

When you are throwing a party that big, people tend to show up early and that they did as visitors from around the world decended on the small Kentucky city that normally is only home to about 32,000. The local grocery stores ran out of essentials like toilet paper and worse than that…sweet tea (in Kentucky, this is the equivalent of Washington D.C. running out of drama). 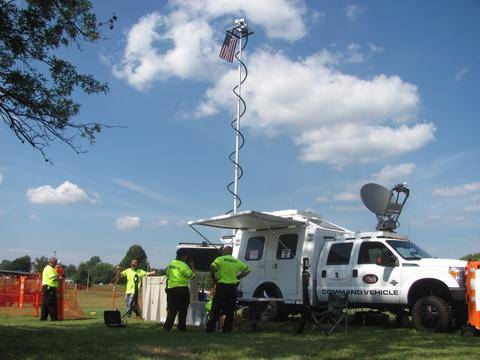 With 21 official events in the County that surrounds Hopkinsville, the largest party took place on the grounds of Hopkinsville Community College, and one of our strategic partners was selected to operate security and medical support for the event.

For three days the front lawn of the college was transformed into a large medical and security compound that was manned around the clock by the C4L Tactical Operations Response Unit.

“It was difficult to plan for,” said the unit’s Commander, Eddy Weiss. “With all those people, we were not sure if we were in for the disaster of a lifetime or if it would go without a hitch, but we were betting it would be extreme either way.”

It was. With the potential for mass illness due to the heat, eye injuries for sun gazers, food poisoning cases due to too many food vendors or the chance of a terror attack on such a large number of people, Weiss said their unit worked for months with local emergency management and the staff at the college to make sure they had every base covered.
“We had a large portable hospital set up along with a large command compound,” Weis explained. We planned for the worse. We started with the hospital and then it was lighting…”

The reason lighting was an issue was not because of the 3 minutes of darkness that the city would experience, but rather the nights leading up to the solar event where security was the highest priority. The second lighting need was in the hospital itself where the FoxFury Nomad 360’s illuminated treatment areas, a triage tent and a longer-term care facility that had all been constructed on the college property. 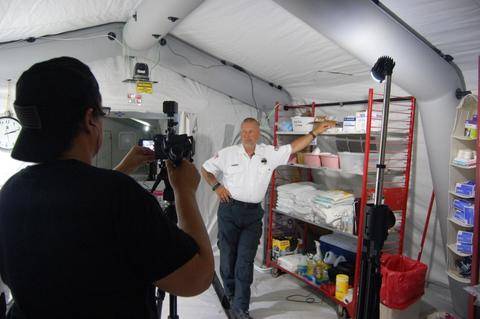 While deploying the Nomad Primes throughout the compound, the team of responders were approached by a security professional that had been tasked with creating a surveillance camera web across the property. While stringing ethernet cables to cameras, the surveillance team had discovered that the lines would criss-cross over walkways and exit paths. Quickly, the C4L Team created a “grid” using Nomad Primes, 360’s and Transformers that not only lit the entire compound, but doubled as power poles. 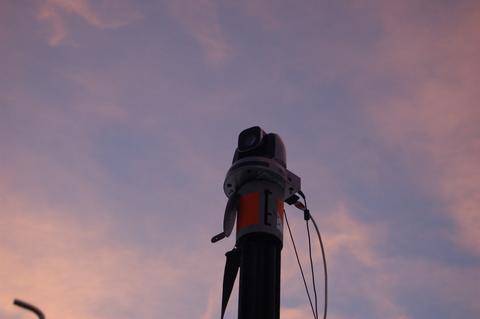 A FoxFury Triposcope was used for a security camera atop a large trailer
“It never stops,” said team members. “Just when we think we know every use for a FoxFury light we find another!”
“It was just an enormous amount of agencies and groups that we were planning with,” the director said, noting that the effort involved well more than a hundred response agencies, departments and private sector groups. 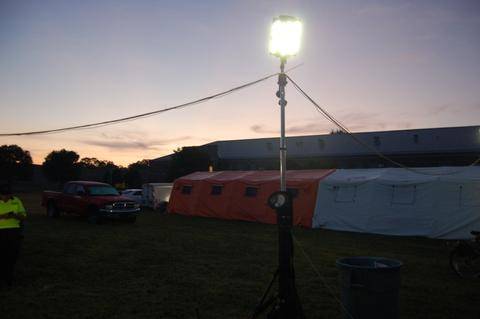 Strong enough to do more than it was designed for, FoxFury lights were used as power poles to string electrical and ethernet cables throughout the campus compound in order to keep lines from tripping event attendees.

So, how did the event culminate? Other than some very minor injuries and only a few security issues, the event was safe, but far from uneventful. People cried, laughed, screamed and hugged each other. Emotions were out on sleeves as thousands stood and held hads as the moon completely blocked the sun in Eclipseville, the single place of absolute totality.

Many emergency management officials now believe that the event was more than just a day of solar celebration. Many believe that the entire event was a fantastic exercise for other massive evets such as earthquakes or large tornado outbreaks. Weiss agrees. Not one month later, Weiss and his special ops team arrived in Texas and used the same ideas in Hurricane Harvey that they had used in Hopkinsville including the “power pole application”. 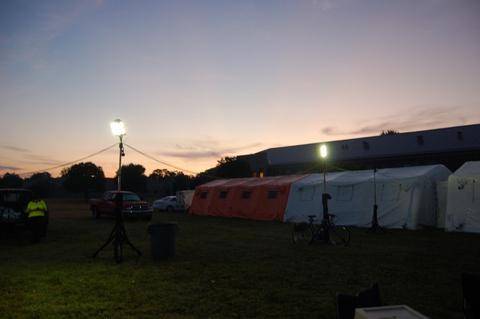 Special Note: When the organizers of the college event saw that the FoxFury lights were so bright and discovered that they would be needed during the actual solar event itself (in the middle of the day), they requested that the lights be set on their lowest settings and turned to face the earth so as not to ruin anyone’s view of the eclipse. Not the first time we have been accused of being bright!