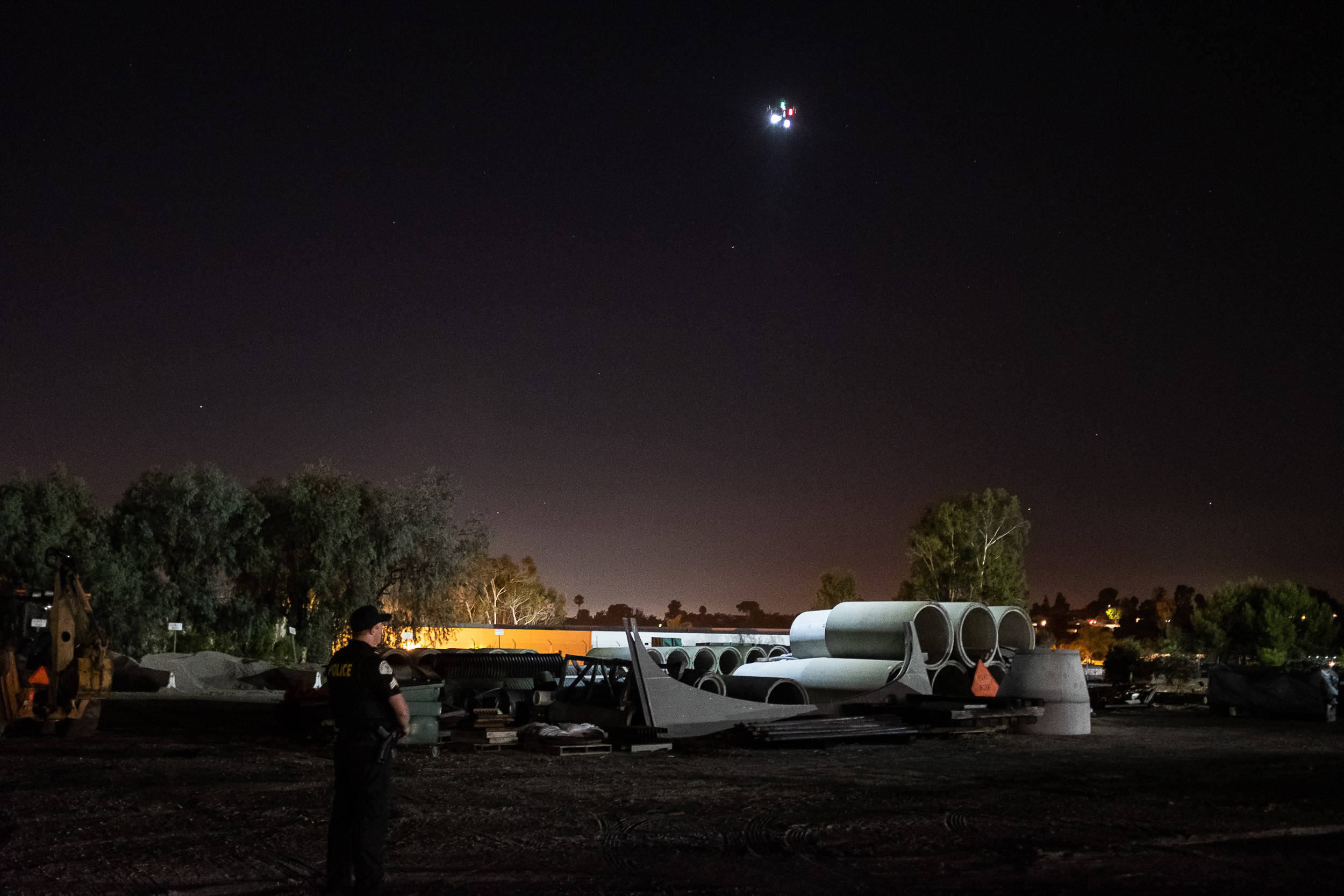 We were recently invited to a night UAS training event by a local police department here in Southern California. They are exploring lighting solutions for search and surveillance and have been testing our Rugo™ lights on their drones for night operations. This was a chance for us to see the lights in action and hear feedback straight from the source.

We arrived thinking we'd find a couple of officers flying a drone and doing some simple light tests. But we were surprised to find an organized operation with multiple drones, a specialized SUV equipped with a full command center, multiple display monitors, and a team of eight officers. They had their stuff together.

The UAS team had a couple of training exercises planned for the evening - a situational assessment and a search rescue.

The team used a DJI Matrice 200 drone with a Zenmuse Z30 camera, two Rugo™ R1S lights with backup batteries, and a FLIR thermal camera for the training operation. This was their standard set up for most of their night flights. The PIC (Pilot in Control) flew the Matrice with a controller and tablet display. The video feed from his controller was sent to two large displays for the UAS Command team to see.

There was a report of a potential hostage situation with people in a vehicle at the far end of a large maintenance yard tarmac. The team deployed the Matrice to conduct close-range surveillance to get a better idea of how many people were inside the vehicle, what their condition was, and if there was any sort of threat involved.

The Matrice then lowered and circumnavigated the vehicle at a 45 degree position above the vehicle and about 30 ft out from it. Again, the Rugo™ R1S lights pushed inside the windows and provide a clear view of the occupants, their position, and actions. From this position, the officers could tell that the occupant in the back seat had a gun pointed at the driver of the car.

This scenario was a great example of how a UAV could be used to assess a potentially dangerous situation without sending an officer in to investigate. Being that the situation was at night, it was difficult to see what was happening inside the car and assess all threats before approaching the scene. 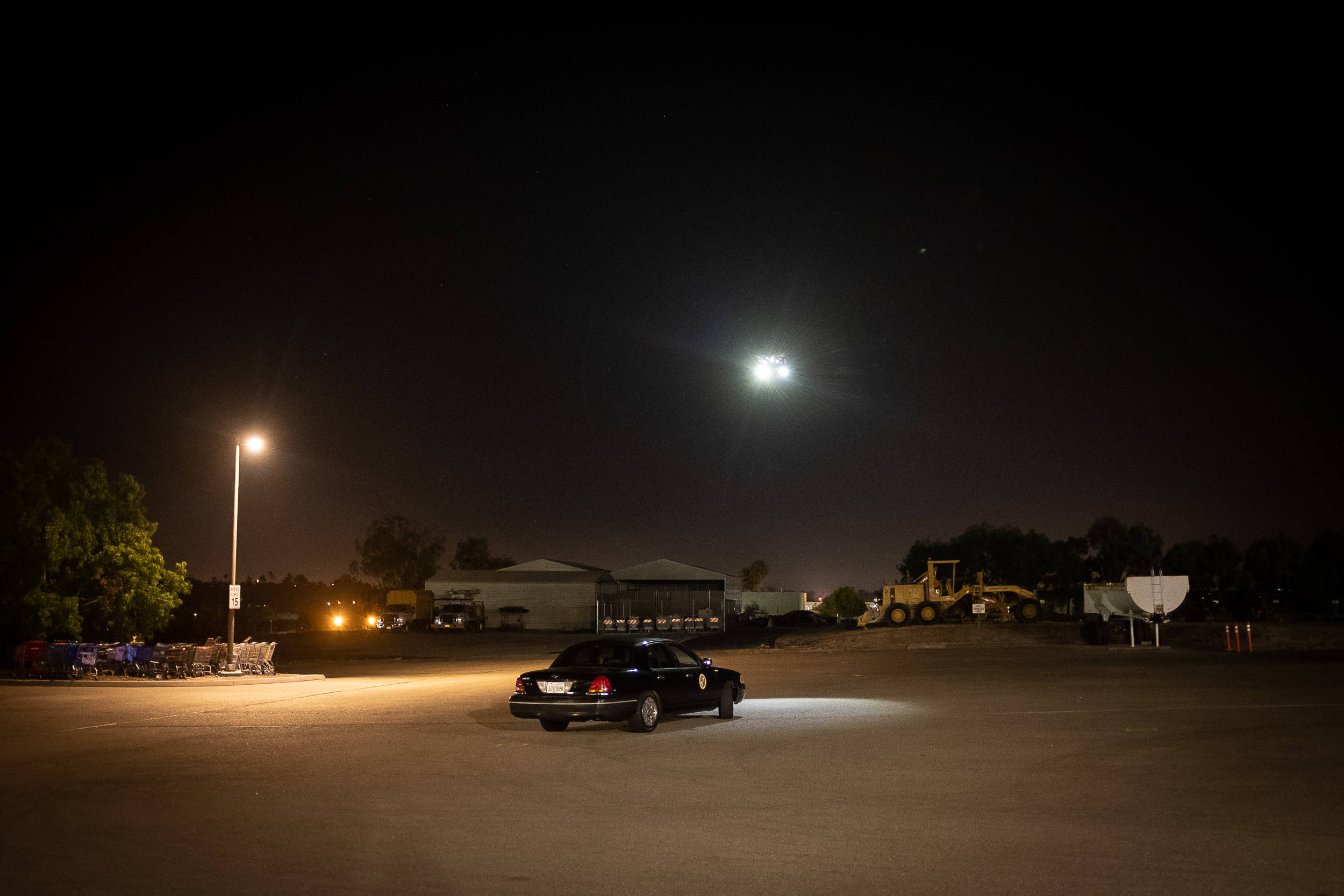 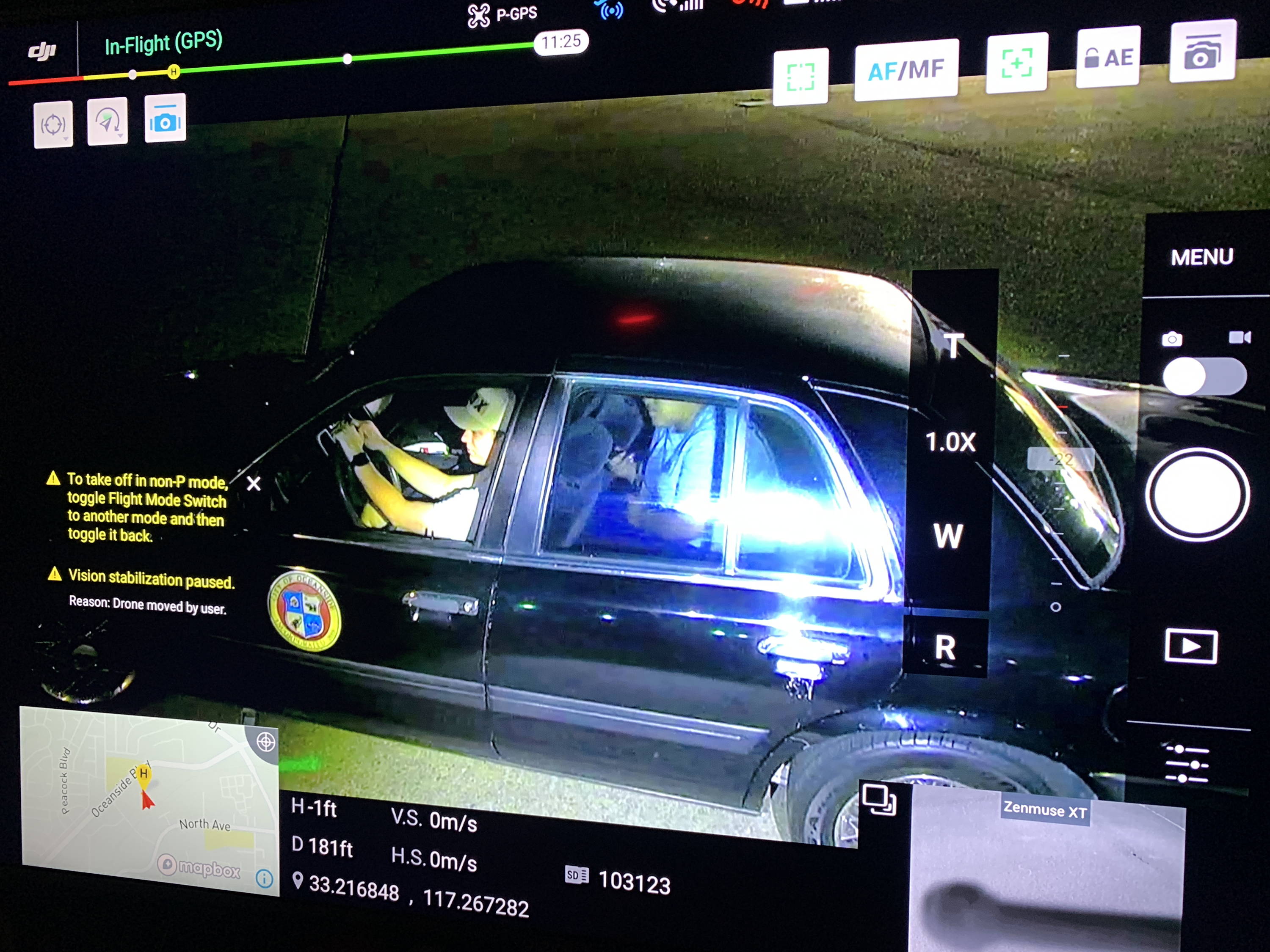 Two people were hiding in a maintenance yard. The area was isolated and dark, so it provided a great testing ground for the Rugo™ lights. Two searches were conducted in different locations.

The Matrice flew at an elevation of approximately 100 ft in a grid formation, crossing back and forth across the yard. From 100 ft, the Rugo™ R1S lights provided a bright beam of light that clearly illuminated the search area. The two people were located via the camera on the drone.

During the training, the Matrice UAV was in flight for about 90 minutes. The Rugo™s ran for 70-75 minutes on high mode. At the beginning of the second search, the batteries ran down. The Matrice was flown back to the LZ where the Rugo™ batteries were switched out within seconds so the search could resume. The people were successfully found.

This test showed that the team could get substantial illumination of the search area from the Rugo™s at a height of 100 ft. Flying from this elevation reduced the danger of hitting electrical wires, trees, or other obstructions. It also provided a wide radius of light on the ground. The lighting on the drones illuminated the search area for both the camera on the drone and officers searching on the ground.

This was an exciting demonstration for several reasons. Seeing law enforcement successfully use UAV technologies for their operations was very impressive. One of the officers mentioned that they had deployed 80 times in the last year and that UAVs completely changed the way they work.

It was also exciting to see the FoxFury Rugo™s used in real life applications so effectively. The Rugo™ is a compact, durable tool that throws out a variable beam of light. It can be adjusted to meet the needs of the department and their operation. This UAS team showed how our lighting technologies could be an invaluable tool when seconds count. 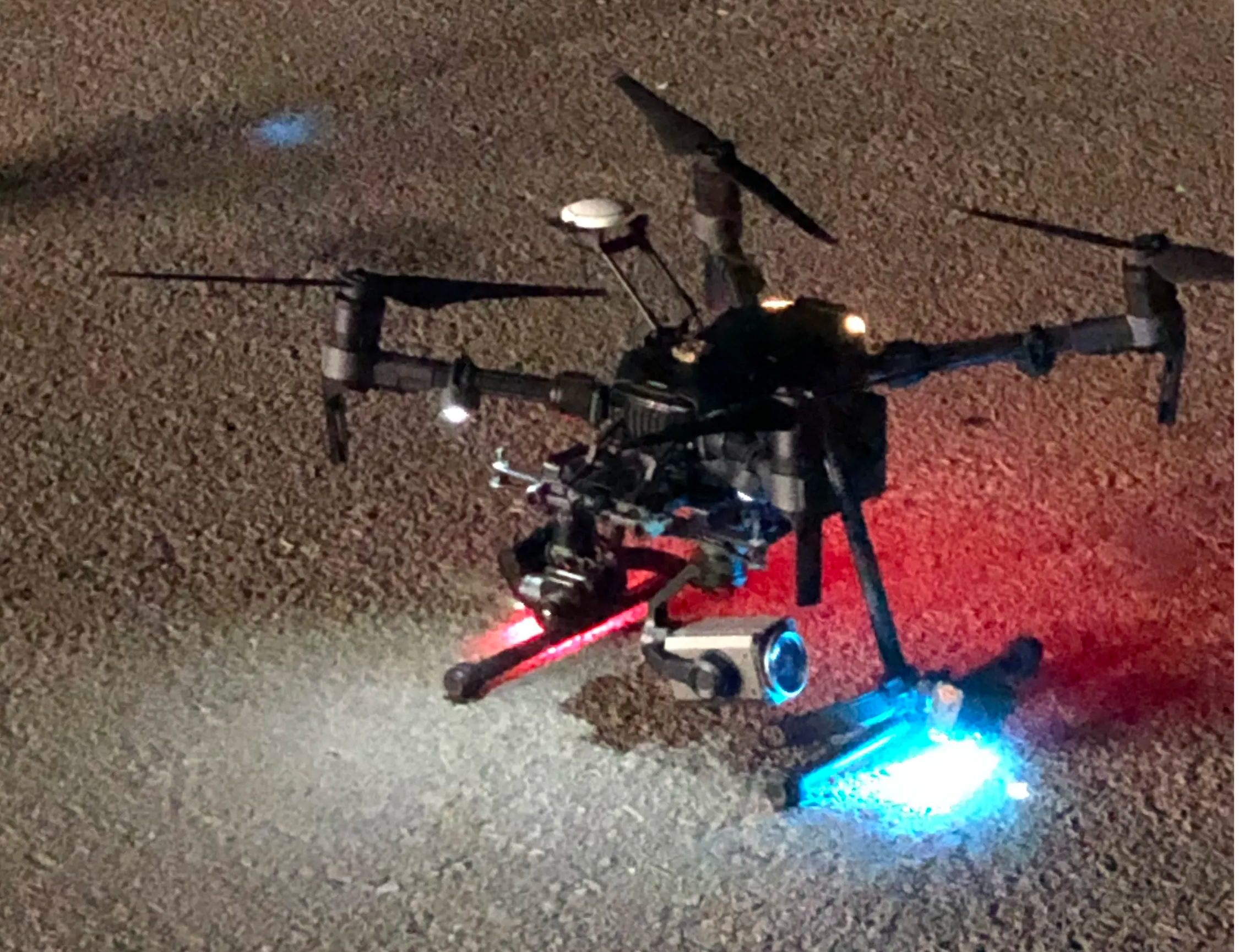 Two FoxFury Rugos mounted to the legs of the Matrice with red and blue gel over the lenses. 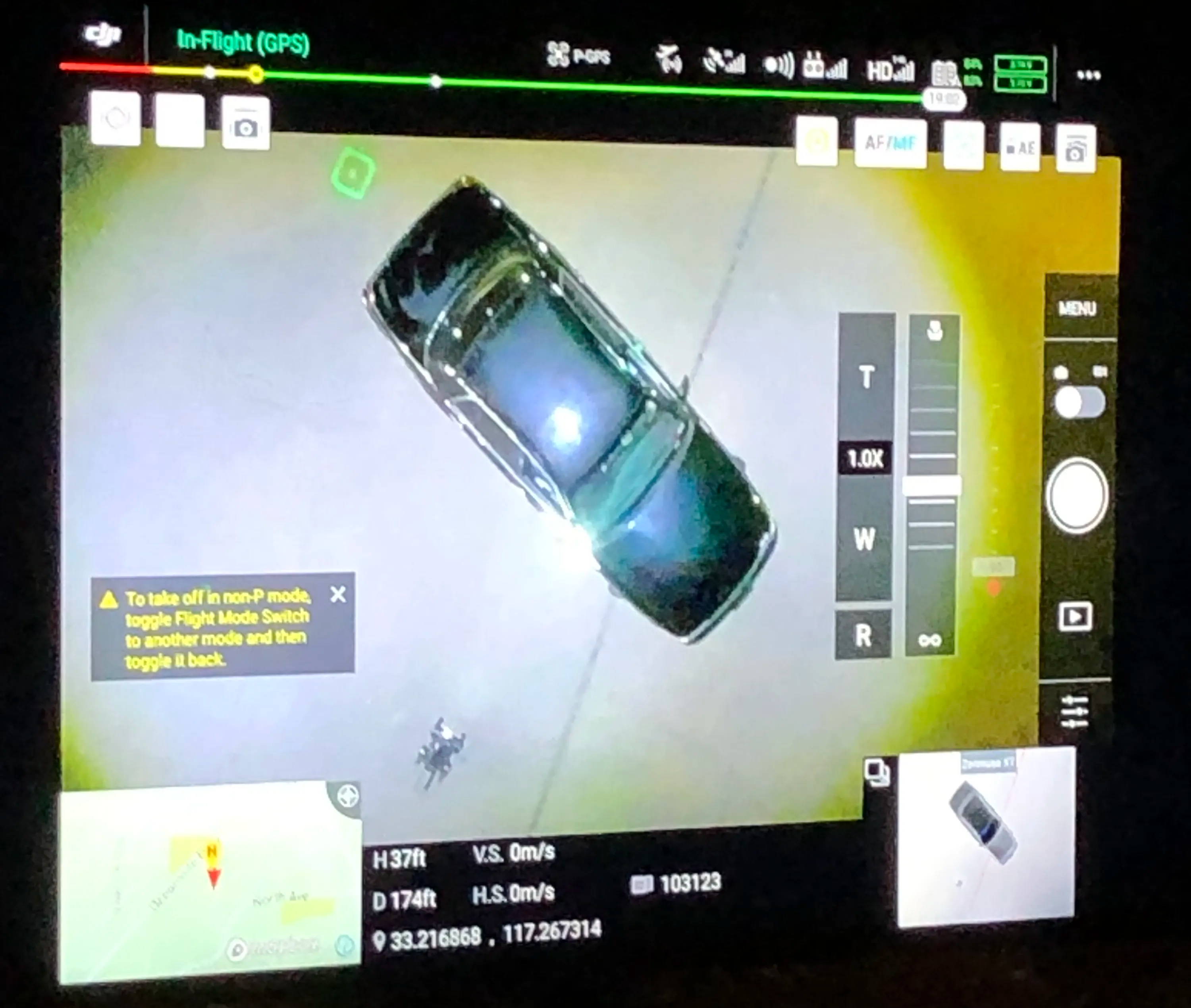 An aerial view from the control center of the drone over top of the vehicle.