Plautus the Roman Playwright, was born in 254 BC. He once wrote, “Flight without feathers is not easy”. He should have been at IDE this year… it’s not only getting easier, it’s fun.

The year 2016 ended with more than holiday gatherings and New Year celebrations for FoxFury Lighting Solutions as we ventured off to the International Drone Expo & Business Conference in Los Angeles on December 9th. While chilly weather swept the City of Angels, inside the Los Angeles Convention Center the hottest new products on the UAS market were everywhere.
For two days, unmanned aerial vehicles swept through netted flight arenas while hundreds of drones, cameras, software packages and yes, FoxFury lights were on display for both CONsumers and PROsumers alike. The theme of the event, “The Drone Business Today” was absolutely the topic of conversations both in and out of the booths as the drone business is booming and even the most generous of forecasts regarding the industry appear to have been on the light side. 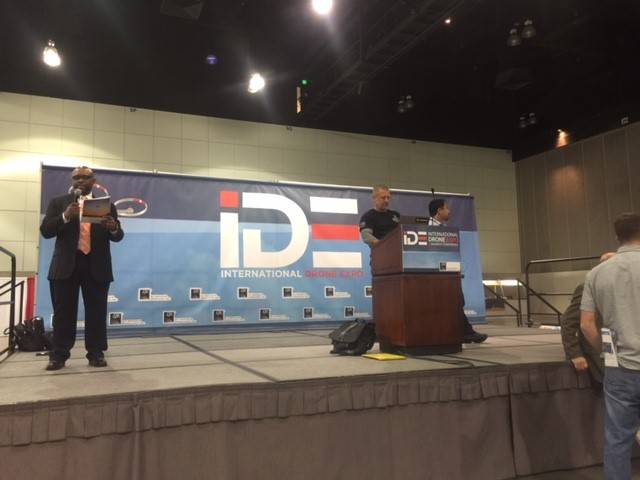 The FoxFury booth never saw a lull as attendees gathered to discuss the concept of ground lighting such as the Nomad Primes and 360’s working closely with the high tech cameras of the future overhead.

“It’s important to remember that the more drones do for us in the sky, the more we have to accommodate the work being done on the ground,” stated C4L & Associates rep Eddy Weiss. “FoxFury’s lighting solutions give the pilot the same abilities and confidences that air traffic control towers give commercial airline pilots!”
The show was a hit with attendees, but, to be honest, one of the hottest products on the floor was the new FoxFury RUGO which caught the attention of the entire market. Rugged, rechargeable, weather proof and compact, the RUGO attracted drone operators from almost every field one could imagine from law enforcement to the fire service, from utility operators to inspectors, from hobbyists to film makers. 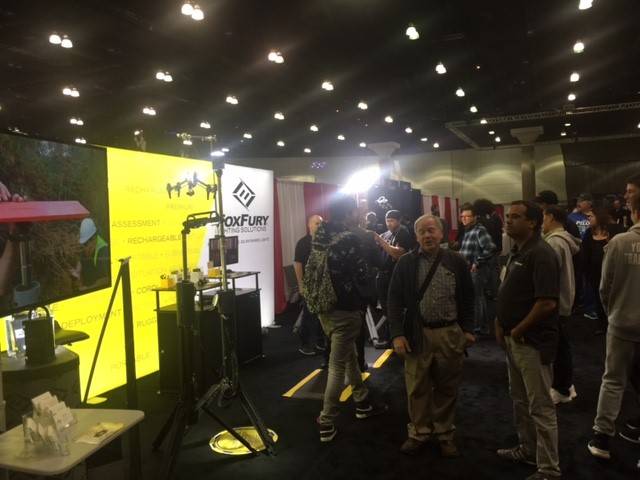 he RUGO was not the only show stopper as attendees swarmed the new FoxFury high CRI lights and began to conceptualize the possibilities these powerful solutions bring to the film industry, a market being changed drastically by the use of drones.
One did not have to look far to find things of interest as the exhibit floor hosted extreme drone races with some of the top racers from around the country, but the classrooms and theaters were also filled with stars such as Romeo Durscher of DJI who spoke on the future of the industry. Other speakers included Lt. Commander Leedjia Svec, PHD of the United States Navy who enlightened the audience as to the challenges and possibilities of government and industry partnerships.

One highlights of the event was the IDE Women in Drones Breakfast that featured a panel of female professionals that have been embedded in the growth of the drone industry. The panel is a part of a much larger group of women that appear at drone conferences around the country speaking on the industry from different points of view and encouraging the involvement of more women in this high tech race to tomorrow.
From the hobbyist to the retired military helicopter pilot, the show held more than just products and network opportunities. IDE gave us a glimpse into a future none of us could have ever dreamed of twenty years ago; a world that FoxFury has rapidly become a part of both in the sky and on the ground.
Plautus would have loved it.

By Eddy Weiss
C4L & Associates
Eddy Weiss is a nationally renowned expert in the fields of Emergency Management, Disaster Preparedness, Terrorism, BIO Terrorism, and all types and phases of disasters. With over 180 certifications to his credit from prestigious organizations such as FEMA, John’s Hopkins, Yale University School of Medicine, and the National Emergency Response & Rescue Training Center (NERRIC), Eddy is the leading expert in Emergency Preparedness and is able to speak on a wide array of subject matters involving crisis and emergency responses.